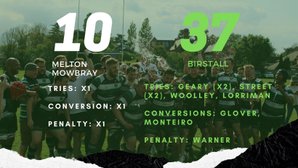 As if the season wasn’t good enough…

Finishing off the season with a trophy is always a nice feeling. But Melton Mowbray pushed Birstall all the way, showing stubbornness in defence and at times some danger with ball in hand. Zack Minton and his Greendogs had to pull together and solve many problems to overcome such a tough challenge of playing the final on Melton’s own pitch.

However the away side fronted up and got on the front foot early, settling the nerves and earning a penalty within the first ten minutes for an infringement at the ruck. Warner, in front of the posts, slotted the first points of the match and put Birstall ahead.

When another penalty near the Melton try line came Birstall’s way, it was time for a rolling maul. Luke Geary got his hands on and with the help of his fellow pack, rumbled over and scored the first try of the game. Learning from a previous error in the maul, Birstall repeated this again later on and Geary went over for yet another score. A proud day for him with his family watching on the side.

In between the two rolling maul scores, a play from the top of a well executed lineout saw the ball worked wide to Min Street, who is going from strength to strength alongside his brother, to score in the corner. A great moment for the two brothers to play alongside each other in a final.

The scrum was a hard fought battle throughout the final. For the most part Birstall managed to get the squeeze on, but the hosts had their moments and gained confidence. Melton Mowbray, who have played their matches in Mindlands Three East (South) showed their toughness and grit to get back into the contest. After a Greendog player was caught not rolling away at the ruck, Melton brought themselves back into the contest with a penalty kick and asked questions of the away side as to whether they would respond or not.

The start of the second half was quick, and seeing as how Adam Woolley got the ball in his hands it came as no surprise. However he showed off his Messi like feet, grubber kicked the ball forward and pounced on the bobbling Gilbert over the line. Try converted.

Melton scored after persistent pressure on the Birstall line. But the substitutes did an amazing job to keep Birstall going as the dominant side. Jaime Monteiro had a huge hand in the final score, distributing the ball wonderfully towards Street, which then went back to Monteiro and eventually the hard working Lorriman, who like all great wingers, knew where the ball was going to be and bag himself a try. Jose Monteiro converted.

The full time whistle went and after the third time of asking, Birstall won the County Bowl. An amazing moment for all involved and wonderful to see all of the Greendog’s friends and family come out to support. Without them, we would not be able to do what we do, so days like this are not just for the players, but their loved ones as well.

We cannot have given anymore this season. Everyone deserves some much needed rest. We’ll see you next time for the 2022/2023 season. Who knows what’s going to happen, just don’t miss it!